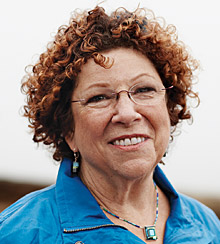 I’m a big fan of management thinker Meg Wheatley. Actually, to describe Wheatley as a management thinker doesn’t quite do her justice. Since the early 1990s, she has been researching and writing about organizational learning, change management, and spiritually grounded leadership. But she’s also devoted a considerable amount of energy to building heathy communities both in organizations and in impoverished locales.

Of late, Wheatley has been writing about how to persevere in the face of adversity and how to shift thinking in the midst of difficult circumstances, both timely skills.

So I was eager to read the transcript of the conversation between Wheatley and the sharp-thinking Art Kleiner, editor-in-chief of strategy+business. They don’t disappoint.

Wheatley says that it is a difficult time for leaders to be innovative, and that there is little time in modern organizations for reflection and learning what works and doesn’t work.

“For me, community — people working together and knowing that others are there to support them — is a critically important but largely invisible resource. . . But community is hard to find in most organizations. Not only do many leaders deny that this capacity is important, but they’re actually destroying it through their current management approaches.”

Such as? Wheatley says many forward-thinking business leaders are being driven by their boards and bosses to implement continuous cutbacks and produce more results with fewer resources.

“Too many leaders fail to realize that the old ways, their mental maps, aren’t giving them the information they need. But instead of acknowledging that, they push on more frantically, desperate to have the old ways work. When human beings work from fear and panic, we lose nearly all of our best reasoning capacities. We can’t see patterns, think about the future, or make moral judgments.”

When you’re lost, Wheatley says, the solution is to admit it and call together everyone who might have information that’s needed to construct a new map, people from all levels of the organization.

Kleiner pushes Wheatley to explain her view that the only leaders who succeed are those who practise a spiritual discipline. Wheatly doesn’t back down, though she makes clear that, by “spiritual discipline,” she doesn’t mean a religious practice per se but rather “some regular activity that leads you to reflect on your struggles and challenges in a larger context.” That might be meditation, time in a natural space, or even Alcoholics Anonymous. Her point is that leaders must engage in some practice that pushes them out of the perception that they are the centre of the universe.

You can find the original article here (registration may be required)

« The Faces of Fraud
The insidious power of toxic workers »