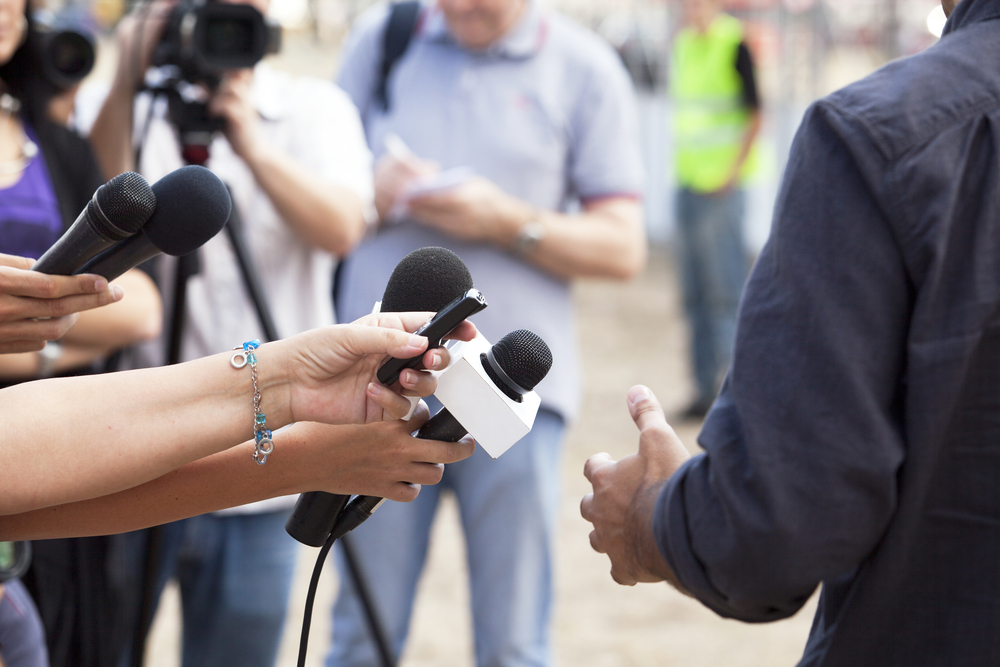 I recall an interview that MIT Sloan Management Review conducted in 2012 with Andrew McAfee of the MIT Center for Digital Business. McAfee was the guru who coined the term Enterprise 2.0 to describe the potential for collaboration tools to improve how organizations work. In discussing CEO attitudes around social networking tools, McAfee had this to say about internal communication flows:

“When I talk to CEOs, they desperately want to hear the voices of their customers, the voices of their employees. They want the straight talk to flow down and flow up in the company. But I also get the impression that there’s kind of a middle layer that has traditionally been the signal processor, both up and down, and some of them don’t want to see that role go away. The middle is very often a conservative place in organizations. The challenge is that the top can be sincerely interested, and there can be a lot of frontline people who are sincerely interested, but it’s what happens in the middle that can determine success and failure.”

The “middle” to which McAfee refers is largely the purview of communications professionals, the signal processors in most organizations. Like HR professionals, comms people often complain of a lack of respect and role confusion. This insecurity may be explained by a lack of alignment around the roles and responsibilities of corporate communications — CEOs and communicators may not be on the same page.

This is the ground that a team of German management researchers explored, and they came away with some thought-provoking conclusions. Researchers Zerfass (U Leipzig, Germany), Schwalbach (Humboldt-Universität zu Berlin), Bentele (U Leipzig), and Sherzada (U Leipzig) conducted two surveys of 602 CEOs and executive board members as well as 1,251 communication managers from German companies in 10 industries.

They found top executives and communications professionals agree that communicators act as “facilitators” between the organization and its stakeholders, with moderate influence. And they both believe that a positive image and corporate trust are the most important objectives for corporate communications.

According to the German survey, there are many areas in which CEOs and communications professionals differ.

Role of corporate communicators — Communicators are much more likely than CEOs to see their role as official spokespersons, senior management advisers, and “scouts.” 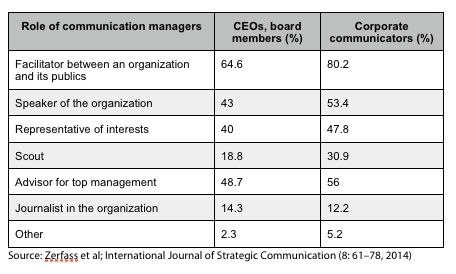 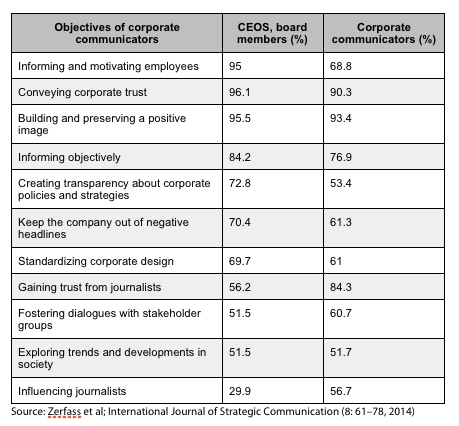 How to deal with demands for transparency — Here are the biggest differences. CEOs have a much higher expectation that communicators be as transparent as possible and not hide negative information. 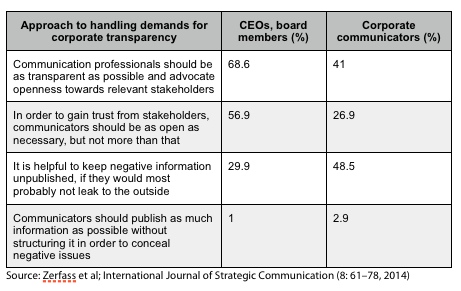 The researchers note that while communications professionals often demand a stronger strategic involvement, “as long as their visions do not match those of their superiors, it is quite understandable that CEOs do not see a necessity for an increased strategic influence of communicators.”

Keep in mind that this survey was done within German organizations, and some of these attitudes may not be shared among North American business leaders and communicators.

Ansgar Zerfass, Joachim Schwalbach, Günter Bentele, and Muschda Sherzada; Corporate Communications from the Top and from the Center: Comparing Experiences and Expectations of CEOs and Communicators; International Journal of Strategic Communication (8: 61–78, 2014)