You might think that advocacy groups would be the most enthusiastic adopters of social media. After all, social technologies are tailor-made for relationship-driven groups; they harness loyalty and amplify messages. They help smaller organizations do a lot more than their organizational resources would normally allow.

But surveys from a number of years ago suggested that Canadian-based NGOs were slow to enter the world of Facebook, Twitter, LinkedIn, and the like. And today? These organizations, according to Jonathan A. Obar (U Toronto/Michigan State U), have largely made the leap, yet they are still hobbled by a number of hurdles.

Obar surveyed more than 50 advocacy groups operating in Canada to learn more about how they use social media to further their causes. Some highlights: 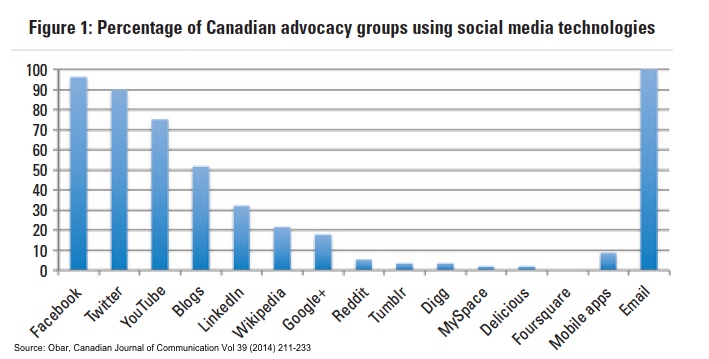 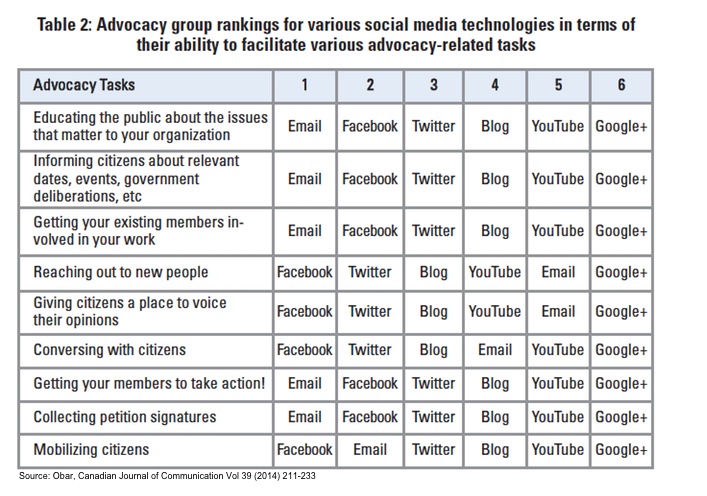 In his interviews with NGO leaders, Obar found that advocacy groups still see some drawbacks in using social media. For one thing, Facebook, Twitter, and their ilk require a considerable commitment of staff time and resources, and there is a steep learning curve in using social media properly.

Some groups told Obar that they remain unconvinced that social media are effective tools for advocacy. One anonymous NGO manager claimed social media provide “basic recognition, nothing more. A ‘like’ button does not help us in any way.” Another noted, “Social media allows us to create a base movement, but [it] has also created a substantial class of ‘slacktivists’ who … can never truly be nurtured into real activists.” Obar says some groups believe social media may create a false sense of a movement’s reach and influence.

“Qualitative results addressing perceived social media affordances suggest that while groups are enthusiastic about social media’s potential to strengthen outreach efforts, enable engaging feedback loops, and increase the speed of communication, they remain cautious of unproven techniques that may divert resources from strategies known to work,” he wrote in the Canadian Journal of Communication.

It’s worth noting that Canadian activists appear to be laggards in this area. Obar was part of a team that conducted a similar survey in 2012 of 53 advocacy groups in the U.S. All the U.S. advocacy groups surveyed use social media technologies to communicate almost every day.

« Are Mega-Sports Events Worth Mega-Advertising Attention?
Misguided Activists: Why Target the Good Guys? »