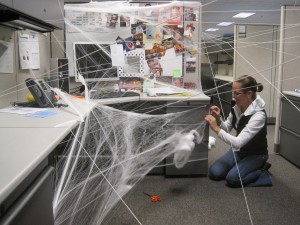 If you work in certain parts of the U.S., you have the chance once a year to celebrate Fun Day. Perhaps on that special day, you made you co-workers address you by your pro-wrestling name. Maybe you placed your garbage can on the desk and labelled it “Inbox”, or channeled Celine Dion during a karaoke break.

Then you went back to work. Did anything really change?

By all accounts, it seems that “fun at work” has become an established movement aimed at boosting worker engagement and the bottom line. But does “packaged” fun, dictated by management, make work more enjoyable, increase motivation, or improve organizational performance? I doubt it.

Intuitively, planned fun time doesn’t seem to hold a candle to planning a work environment where fun happens naturally. Empirically, the link between packaged fun and better performance has not been established.  In an article published a couple of years ago in the journal Employee Relations, Bolten (Strathclyde U) and Houlihan (University Colleage Dublin) expressed their own reservations. They pointed out that, “The pursuit of productivity inspired by the loose belief that happy workers make productive workers appears to invoke an equally loose assumption that workplace fun delivers happy workers – and so the cycle moves on.”

What does organic workplace fun look like? In the same journal, Stromberg and Karlsson (Karlstad U) reported on their study of two groups of meat packing workers — the largely female “slicers” and “preparers” — at a Swedish food preparation company.

To an outsider, the meat packers’ work may seem greasy, monotonous, and even dangerous. But, the researchers reported, some of the workers saw it differently. The workers told them, “It’s not that bad. We have each other, you know”; “I’ve been in worse places. Here, you’re at least allowed to laugh”; and “Time passes quickly when you’re having fun and laugh . . . and when you’re being a bit mischievous”.

“There is no question that humour plays an important role in the everyday work of the meat packers,” the researchers wrote. “Laughter was often heard and the warm and supportive atmospheres within the groups seemed to create a natural setting for jokes to be told and pranks to be played.”

But as their study progressed, another side of workplace humour was revealed: a more subversive form of fun such as ironic jokes and belittling comments about what was going on within the company. Men and managers were prime targets for meat packers’ satire.

“In these cases these subversive humour rituals accentuate the differences between managers and meatpackers, in similar ways as coded jokes. Repeating words once said by managers, in-group expressions, gestures and mimicry behind someone’s back takes the applied humour one step further.”

This is a far cry from what managers would expect out of their fun days.

For those wishing to use fun as an engagement tactic, an honest size-up of workplace demographics would be wise. After all, there are clear differences in how people of different ages and backgrounds respond to fun in the workplace. Researchers such as Lamm and Meeks  (San Francisco State U) have shown that baby boomers are a lot more negative about workplace fun than millenials. Baby boomers tend to be competitive and searching for optimal work environments; fun is seen as counterproductive to their competitive edge. Generation Xers, who embrace balance in their lives, are more open to organized fun activities. On the other end of the spectrum, millennials are likely to regard fun in the workplace as a requirement, not a benefit, of employment.

At least with these sorts of insights, fun initiatives can be better planned and delivered, with less chance of blow-back.

« When in doubt, newbie, open with a joke
Why are we smarter but less creative? »