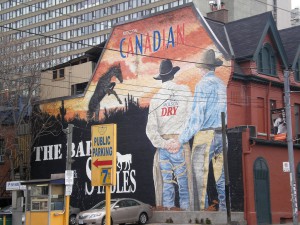 You could make the argument, at least in the Western world, that corporations have been ahead of public policy in recognizing equal rights for lesbians, gays, bisexuals, and transgender people (LGBT). In jurisdictions where governments have been timid, a great many employers offer protection against employment discrimination based on sexual orientation. At the same time, marketing departments have crafted campaigns directed at LGBT consumers, encouraged by experts claiming that LGBTers embrace brands that support their cause.

But do they really? Gillian W. Oakenfull (Miami U) set out to explore the importance that lesbian and gay male consumers place on various corporate activities when evaluating the gay-friendliness of a company. The takeaway from her research is that marketers must avoid the common practice of thinking of the gay market as “a monolithic and homogeneous segment of all gay people.”

To conduct her research, Oakenfull distributed surveys to three groups: participants at an international gay and lesbian choral festival in Montreal, attendees at a gay pride festival in Columbus, Ohio; and members of the gay and lesbian employee group at a mid-sized midwestern U.S. university. Participants consisted of 405 self-identified gay adults — 208 women and 197 men, ranging in age from 18 to 75 years. It’s considered the largest sample of gay consumers in academic consumer research.

Oakenfull asked survey participants what characteristics they considered important in determining whether or not a company or organization was “gay-friendly.” They were then asked  how important they believed it was that a company was involved in six gay-oriented corporate activities (examples: provision of domestic partner benefits, support of gay causes and organizations, placement of ads in gay media).

One of the main conclusions was that lesbians place more importance than do gay men on most LGBT-oriented corporate activities when evaluating a company’s gay-friendliness. Oakenfull figures that’s partly due to lesbians and gay men falling into different demographic and socioeconomic categories. For example, there is a signifiant income gap between lesbian and gay male households (gay males tend to earn much more), and lesbian couples are more likely than gay male couples to have dependent children (23.9 percent versus 10.7 percent).

This may explain why the study found that lesbians, when judging a company’s street cred, place greater emphasis than gay males on corporate activities that:

The study also found that gay men who are strongly involved with the gay community and most likely to be readers of gay media consider placement of advertising in gay media to be more important when evaluating a company’s gay-friendliness than do those who are weakly involved.

Oakenfull advises corporate advertisers to keep these differences in mind when planning advertising campaigns. “Given their low readership of gay media and the lack of social visibility provided by the medium,” she writes in the Journal of Public Policy & Marketing, “lesbians place far greater importance on advertising in mainstream media than in gay media. Companies must also realize that when placing  advertising in gay media (which, in reality, tends to be gay male media), gay identity plays a role in affecting the importance that gay males place on this advertising when evaluating a company’s gay-friendliness.”

« Does the Web Build Bridges or Fortresses?
Polyglot Management Teams Learn Best, and it Shows in Their Acquisitions »