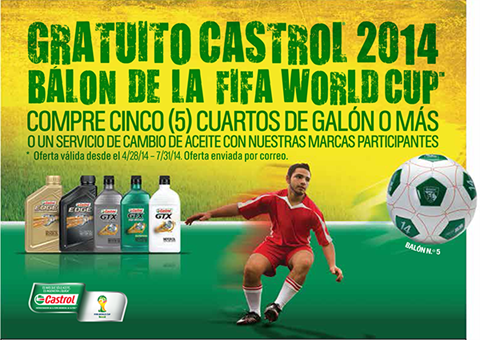 Hockey snobs be damned: this year’s World Cup has been a delight to watch. Here in North America, it’s a standard complaint that soccer is tedious to follow. I actually find American football or hockey more tedious as television events largely because of how the games are paced to accommodate advertising. You can enjoy a 45-minute stretch of soccer without having to cut away and be assaulted by TV spots for running shoes or online hotel booking.

Now, the World Cup is no slouch when it comes to marketing. All mega sports events hoover up global ad budgets for the simple reason that they guarantee large audiences that devote an inordinate amount of time following the action. They attract not only event-based advertisers and sponsors but also ambush marketers (Pepsi, I see what you’re doing during the World Cup) and “opportunistic” marketers (those that boost their ad spend during the sporting event time period).

But is it a great marketing investment to go all-in during a big sporting event or is herd mentality at work? For a given business objective, do such investments really pay off or would it make better sense to focus on smaller scale initiatives? There are two factors that make me wonder: the high premium that these events command and the high amount of “noise” that makes it hard to actually stand out.

Is it a great marketing investment to go all-in during a big sporting event or is herd mentality at work? Would it make better sense to focus on smaller scale initiatives?

Research hasn’t been clearcut. Some studies have confirmed an overall positive impact of advertising around major sports events, linking it to higher brand recall, purchase intentions, and movie ticket sales. But it’s hard to generalize from these studies.

Two papers recently published in the International Journal of Research in Marketing (IJRM) start to fill in the gaps. Maarten J. Gijsenberg (U Groningen) investigated the connection between conventional advertising and sales before, during, and after major sports events. He looked at four years of weekly observations for 206 brands in the UK across 64 consumer packaged goods categories.

His study confirmed that these events trigger an advertising surge: the number of advertising brands rose 7 percent and the average amount spent on advertising increased 10 percent. But he found that advertising effectiveness diminished especially before and during major sports events, in both the short and the long run.

From this, Gijsenberg concludes that brands suffer from the clutter caused by the increased number of advertising messages, from both the same and other categories, competing to capture consumers’ attention.

“The results of this study show that such herding behaviour (‘I must advertise because everybody else is doing so’) may not be an optimal strategy, at least when the brands’ focus is on directly increasing sales through advertising.”

The story may be more promising for sponsorship of sports events. In the same issue of the IJRM, Marc Mazodier (U Nottingham Ningboa) and Pascale Quester (U Adelaide Business School) reported on their studies that investigated the connection between sponsorship investments and brand affect (the values and feelings that a brand projects). Using the 2010 FIFA World Cup and 2012 London Olympics, Mazodier and Quester showed that sports event sponsorship improves sponsor-event fit and increases brand affect. This makes sense: sponsorship is more about longer-term branding considerations than immediate sales lift.

In practical terms, sports marketing is not an all-or-nothing affair. Gijsenberg’s research suggests that advertisers get the greatest bang for the buck by focusing on non-event marketing. But there is still value in having visibility during a World Cup or Super Bowl. If there is a clear fit between the values associated with the event and those proposed by the brand, Gijsenberg says, advertising around the event can strengthen the brand image and positioning (known as “match-up effects”).

He also suggests sports-event advertising makes sense under two conditions: that the investments are focused on single-sport events (not the Olympics), and that they are not incremental investments but “profound increases resulting in a significant lift of the brand’s share of voice.” His reasoning: “By focusing on single-sport events (e.g. FIFA World Cup), brands will have better chances of reaching a more focused group of consumers multiple times. By outspending competitors, they will be able to stand out from the clutter and to gain more attention from consumers. In turn, this will increase the likelihood of purchase.”

So advertisers, if you’re going to pony up during a World Cup, you’ll have to yell really loud to make it worth your effort.