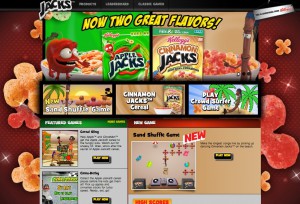 It’s not quite in the category of marketing cigarettes to young teens, but the efforts by food and beverage companies to entice children to consume sugary breakfast cereals and soft drinks are highly effective, if not controversial.

Public health authorities have repeatedly warned that food marketing influences children’s food preferences and diet, and contributes to the high rates of obesity. Trying to blunt criticism, some food manufacturers signed on to a voluntary code of ethics, the Children’s Food and Beverage Advertising Initiative, promising to promote healthier food in its marketing to children; this pledge extends to their online marketing initiatives as well.

Turns out it has been a hollow pledge, according to a research team. Andrew D. Cheyne, Lori Dorfman, Eliana Bukofzer (Berkeley Media Studies Group), working with Jennifer L. Harris (Yale Rudd Center for Obesity and Food Policy), analyzed the techniques cereal companies used to engage children on websites, and reported their findings in the Journal of Health Communication.

The researchers point out that food and beverage websites deliver branded content to young people using a variety of tactics. Online video games, known as advergames, embed messages about the branded product into the game experience (studies have shown that the vast majority of children playing these games view them as entertainment and not advertising). Cross promotions connect movies or television shows to food products. Online ads and viral marketing techniques allow marketers to amass information about children and their social networks in ways that television marketing can only dream of.

To systematically assess the content on child-directed cereal websites, the researchers began with 26 branded websites generated from all cereals available at a major grocery store chain between October 2008 and March 2009, and then focused on 17 that targeted children directly. Three of the four main cereal manufacturers — General Mills, Kellogg’s, and Post — were represented.

“Despite being in compliance with their own pledges, the major cereal manufacturers’ promotional practices continue to exploit children’s susceptibilities to marketing by advertising high-sugar cereals using highly engaging techniques.”

Here’s what they found:

Clearly, the cereal manufacturers are doing a boffo selling job in the youth market, even better than fast food restaurants that have deeper pockets. As the researchers note, McDonald’s alone had three websites for young people, “yet even the most engaging fast food website, HappyMeal.com, only occupied children 6.1 minutes on average—far below the 27-minute average of Millsberry.com.”

Kids, and their parents, don’t have a prayer.

« Polyglot Management Teams Learn Best, and it Shows in Their Acquisitions
You say you want an innovation revolution? Here’s what you’re up against (a 4-pack!) »