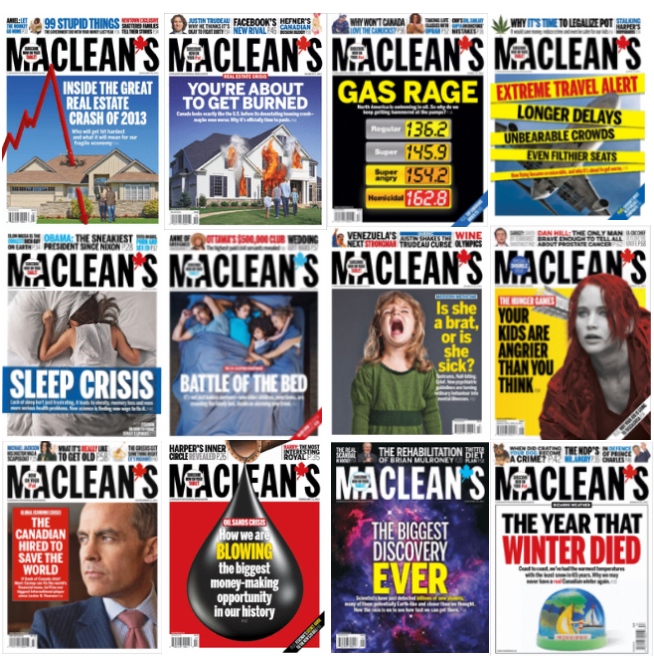 Letter to the editor, Maclean’s magazine, September 9, 2013 issue
As a recent subscriber to Maclean’s, I have been disappointed by its exaggerated cover headlines designed to shock and scare, week after week. Am I really supposed to find children sleeping in the same bed as their parents “alarming”? It’s a good thing the article didn’t actually contain any alarming facts, or I may have had to call my mother and ask her to make space, contributing further to this terrible phenomenon.
— Kate Wilder, Ottawa

I have to admit, I’m a little envious of the Maclean’s editors who can abandon good sense, professional self-respect, and public duty and just let it rip with farcical cover headlines. Mark Carney was hired “to save the world”! The Higgs boson is the “biggest discovery EVER”! Get ready for “the great real estate crash of 2013”!

Some of my fondest memories in journalism are from my stint with an American trash tabloid that was surreptitiously published out of Montreal. We used to sit around like college frat boys and dream up coverlines such as: MIRACLE BABY BORN TO INFERTILE MOM or KILLER DIETS: SLIMMING CAN BE SUICIDE or PSYCHIC ENERGY CURED CANCER. Of course, I could also hide behind any number of pen names: Babette Gold, Ed Monk, Mort Rudman.

But a trash tabloid and Maclean’s till very different fields.

I know what Maclean’s editors are trying to do with these four-alarm covers. Everyone knows. Do these cover treatments provide a bump in newsstand sales? Beats me. But as a reader, I find it hard to take the magazine seriously. Too often, the cover headlines over-hype the stories and are misleading. They set up the reader for disappointment rather than delight.

What do you think: Am I a fuddy-duddy or should Maclean’s editors dial down the drama?

« You say you want an innovation revolution? Here’s what you’re up against (a 4-pack!)
What Corporate Social Responsibility Looks Like Today »