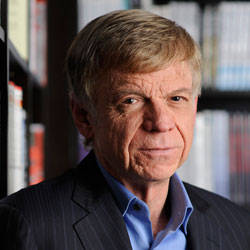 In a few months, we will be celebrating the 20th anniversary of one of the more influential management ideas: the change management process advanced by Harvard Business School professor John Kotter (pictured at right). Kotter’s model is the roadmap for how most organizations prepare themselves for new initiatives or adapt to outside shocks.

Kotter laid out an eight-step process for how to catalyze the troops and deal with internal resistance:

There is plenty of logic supporting this process but it’s hardly foolproof. Blame the idea or the implementer but the fact is that change projects have a lousy track record. One of the most recent studies — the Katzenbach Center at Booz & Company surveyed more than 2,200 executives, managers, and employees— showed that only about half of transformation initiatives accomplish and sustain their goals. The usual obstacles: change fatigue, lack of competency to sustain change, and insufficient consultation in selecting and planning a project.

From the study, Booz consultants took away on big conclusion: that when transformation initiatives fall short, it is usually because corporate culture was an afterthought. Among the survey respondents who said the changes at their companies weren’t adopted and sustained over time, they write in Culture’s Role in Enabling Organizational Change, “only 24 percent said their companies used the existing culture as a source of energy and influence during the change effort. Only 35 percent of respondents who said change efforts hadn’t succeeded saw their companies as trying to leverage employees’ pride in, and emotional commitment to, their organizations. By contrast, cultural levers were at least twice as likely to have played a role in change programs that had succeeded.”

The Booz consultants say there is a disconnect between what many organizations say about culture and how much they attend to it. When they roll out a change project using Kotter’s eight-step process, firms seem to zero in on two levers — communications and leadership alignment — to the exclusion of others. “Culture is the last step in Kotter’s formula, something that can be addressed only after new practices have taken hold and proven their value,” the researchers note. “As our data suggests, culture is often not addressed at all. These priorities need to be rethought.”

When company leaders believe they know who the hidden influencers are, they are almost always wrong

It’s not surprising, really, given how culture is embedded in the marrow of an organization. It requires great insight, deft handling, and painful adjustments to make cultural change stick. One effective strategy is to tap informal peer networks. The Booz consultants provide an example of one global technology company that enlisted 2,000 “pride builders” — highly respected managers with leadership qualities “who excel at helping colleagues feel good about their work” — to connect a new initiative to the company’s distinctive culture. Different tactics were used in different regions. “In Asia, the pride builders created a game show to remind employees of the company’s many assets and cultural strengths. In Europe, the pride builders set up a photo contest focusing on the cultural attributes that were most important at the company. The company also held a global contest, in which senior leaders — and eventually all employees — were encouraged to make videos about the company’s culture and how they tried to embody it every day. (The videos were voted on by employees.)”

In large and even medium-sized organizations, how do you identify these social network hubs or “hidden influencers”? They are often people with very low profiles to whom other employees go for advice or who quietly bring together employees from different parts of the firm. Consultants from McKinsey & Company suggest one way to identify these special people is by using “snowball sampling,” a survey technique used by social scientists. Writing in the McKinsey Quarterly, the consultants explain that this technique could be adapted to the corporate world: companies could send out an e-mail survey to employees that ask, “Who do you go to for information when you have trouble at work?” or “Whose advice do you trust and respect?” This is a quick way to create a “snowball effect” and generate a list of hidden influencers.

In their work in a wide range of industries, the McKinsey consultants have found that influencer patterns almost never map onto the organizational chart, and that when company leaders believe they know who the influencers are, they are almost always wrong. “At one large North American retailer,” they write, “we compared a list of influencers that two store managers created before the survey with its actual results. Between them, the managers overlooked almost two-thirds of the influential employees their colleagues named; worse, both managers missed three of the top five influencers in their own stores.”

« Is Transparency a Greater Priority for CEOs Than Corporate Communicators?
When A Magazine Loses Its Way: Larger Lessons from the Canadian Geographic Fiasco »
Loading Comments...